To this end, do I really need a wi-fi enabled weighing scale? 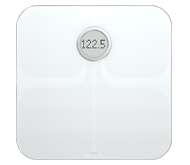 This simple-looking device will apparently do interesting things like "recognise me", and "weigh me", and "wirelessly upload my current weight and fat/body ratio to the vast pool of data known as the internet".
It does cost roughly ten to fifteen times what a regular electronic scale does, though, and probably two to three times an electronic scale with fat-measuring-tech.

I probably do need some scales, as being without any at all is affecting my ability to judge myself. And the gap between some and scales there is reminding me of a great sub-reddit - r/Keming. Curiously this font doesn't lend itself to that joke.

So anyway, I'm tempted to use some John Lewis vouchers I found buried under letters and manuals near my desk to get either a FitBit or Jawbone Up24 or something... Does anyone have any recommendations? Alternatively, I might subscribe to the Gym, which is all of 30 seconds away. Adult life, eh?

Edit: I've found that neither Fitbit nor Up nicely support cycling, so I'm entirely unsure what to do... but I'll probably do nothing. So no worries!

Don't put your e-mail in here.